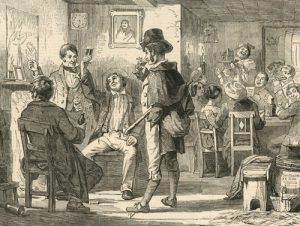 The St. John’s newspaper, The Newfoundlander reporting on the celebrations of the members of Benevolent Irish Society (BIS) in St. John’s on March 17, 1829  wrote:

“The company continued to retire, successively, until six o’clock on Sheelagh’s morning, (March 18) at which hour, we understand, a few of the campaigners might have been seen, as usual, piously and patriotically employed in “drowning the shamrock.”

The  Newfoundland tradition called “drowning the shamrock” takes place on St. Patrick’s Day, when the shamrock that has been worn in the hat or lapel is removed and put into the last drink of the evening.

A toast is proposed and then, when the toast has been honored, the shamrock is taken from the bottom of the glass and thrown over the left shoulder.

Time to bring back the tradition of ‘drowning the shamrock.’

This article was written by Larry Dohey